Enthusiast group for lovers of the VW Scirocco from the '74 classic to the modern stylish coupé
https://www.sciroccouk.co.uk/forum/

Poor thing hasn't been used much recently so a few things are needing attention now. All the rubber parts - CV boots, ball joints, tyres. I've ordered a load of stuff today, the rubber bits as well as new rear discs and wheel bearings.

The engine was sounding rough too after I fixed an HT problem a couple of weeks ago (transistor pack), so I reset the ignition timing, replaced the HT leads and checked the carb balancing. Sounded ok briefly but today was properly rough again, so I decided to check the cylinder compressions.

Took the plugs out, found no.1 plug very oily on the threads so the valve cover gasket is leaking, and screwed in the compression tester... no.1 cyl showed as 210psi. Pleasing.

Not pleasing is the way the compression tester is stuck in the head.

What an arse, I now need to take the head off to try and get the damn thing out.

by Brunty
Oh yes, and the clutch slips badly! My evenings and weekends will be cut out...

Plan is to be ready to show the car off at Ultimate Dubs in March.

good luck, i take it its been handed over to you from your dad

The offending compression tester has unscrewed! I was just walking past and I thought, oh well, give it another quick go.... Maybe the load of WD40 I squirted in last night helped!

by Brunty
Stuff arrived in the post today, rear brake discs, wheel bearings, rocker cover gasket and CV boots... That means on Friday evening I can change the rear discs and finish checking the other 3 cylinder compressions.

Also started working on the rather stupid way the seats were mounted. They basically have 3 sub frames meaning that my head was scraping the roof...

And the sliding part is mounted upside down! I'm getting rid of the tilting part which means I can lower the seat by about 4 inches, but retain the sliding part so that my girl racer will be able to drive.

There will be more updates over the weekend I hope

by Brunty
Back in the workshop.

I should update the drivers seat part -

Removed the beam with a chisel and angle grinder, chisel is best it turns out and it doesn't create burning sparks!

I'll be able to mount the modified seat bracket soon once my drill battery has charged up.

by Brunty
OK, reasonably productive afternoon, even though it seems to have taken AGES to get the drivers seat mount sorted!

The rear caliper brackets were completely filthy and rusty, so a blast with the knotted wire brush on the angle grinder and a lick of hammerite satin black was needed. 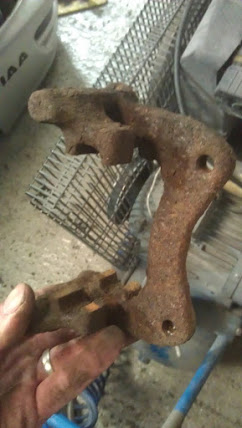 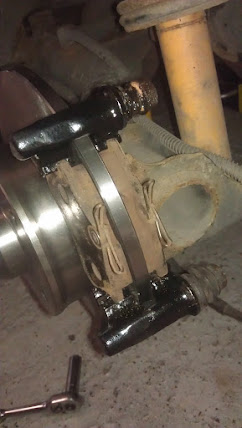 by Brunty
Then I got back to the seat mount. One of the reasons it took ages was my corded electric drill finally stopped working last week, so I took in a battery powered drill from Dad

Unfortunately, both batteries were flat as pancakes and so I juggled them from the charger back and forth to get the holes drilled.

End result is good though, I now have a drivers seat that slides back and forth and is low enough so I can see out the windscreen!

The beam came out as mentioned before. You have to if you want to fit buckets properly unless you're very tall... Then the mounts were modded a bit and some welding was done so I could increase some clearance by getting rid of nuts and bolts. 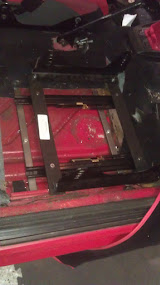 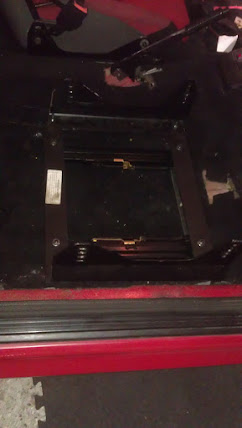 And proving it slides! 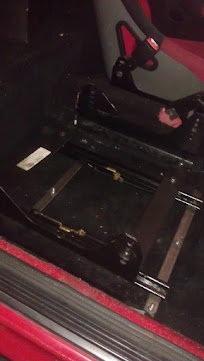 And the finished result 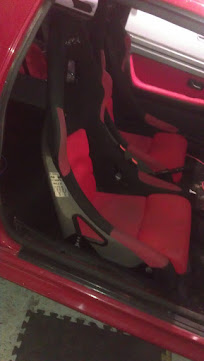 Look at the head height - helmets are now wearable! 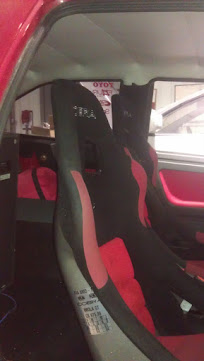 Then it was time for beer and writing this

by Brunty
Just swapped the rear springs for a pair of Weitecs. The springs on there were actually Eibachs, but they looked pretty rusty!

Had a quick look at the wiring, in particular the redundant wires hanging around in the engine bay. Think that'll be a job for another day though...

Hoping to receive my order from Opie Oils tomorrow, it was delayed due to the lack of spark plugs on their shelves

Once I've got the new oil, coolant and plugs I can figure out the engine, and then find out if the clutch really has worn beyond the point of no return!
All times are UTC+01:00
Page 1 of 3
Powered by phpBB® Forum Software © phpBB Limited
https://www.phpbb.com/